Harry’s gone for placement, dishin’ out the medicine,
Nation’s in the basement, despairin’ at the government,
The man in the waistcoat, looks out, jumps up,
Shoulder’s feeling pretty rough, readjusts his shirt cuffs.

You’re out, kids, but look what you did,
God knows when you’ll be doin’ it again,
Approached it the right way, makin’ lots of new friends,
Man in an England cap in the Wig and Pen
Goes and turns the sound down: that’s enough, thanks, Glenn.

Stones rocks, shirt red, Maguire leaps, big head,
Trippier in the heat puts balls in the box but
Think about how you play, don’t give the ball away,
The people in the pub say Raheem’ll score one day.

You’re out, kids, but look what you did,
Walk on your tip toes, tuck in your elbows,
Watch out for the long throws, dictate how the game flows
Keep the door closed, confidence grows,
It helps to have a proper plan and know which way the kicks go.

Look out, kids, you’re gonna get hit
By foulers, cheaters, penalty spot abusers,
Turnin’-up-the-heaters,
Pickford leapin’ and stickin’ out his left hand,
Build a team of leaders. Who was markin’ Mina?

You’re out, kids, but look what you did,
Don’t hide down a manhole, think of all you handled,
Avoidin’ all the scandals, leadin’ by example,
Now see what you’ve begun, it’s time to move on,
Hard work, teamwork, relightin’ the candle.

There’s a hole in my life where you really should be
Because I’m stuck on you but you’re not stuck on me.
Until I possess you, I shall never be free,
Panini sticker number five forty-three.

I don’t care for your Neymar or Lionel Messi.
You can shove your Ronaldo – of him, I’ve got three.
It’s not about quality but quantity for me,
and I have zero of Gabriel Gomez, you see.

And now my money’s all gone, unfortunately.
The bailiffs are here and my family’s left me.
But it was worth every penny, I’m sure you’ll agree
For Gabriel Gomez, number five forty-three.

Don’t get me wrong, I’d love nothing more
than to commune with Mother Nature.
But what can I do? It’s out of my hands:
Nigeria are playing Croatia.

What’s that? Another meal on your own?
You’re quite right, there is nothing bleaker.
But this is the big one. I’ve waited all day.
Switzerland – Costa Rica.

Sorry I shall miss your mum’s funeral
but I should be there in time for the wake.
Do understand, it’s Morocco – Iran
and for both teams there’s so much at stake.

I see that you’ve filed for divorce.
I’ll sign the papers as soon as I can,
just ten minutes more (plus time added on)
of Colombia versus Japan.

Neymar
Do your hopes live on.
Like Julio Cesar,
You came,
But did not soar
Or conquer.

I dreamt of
Bikini knickers
Stuffed with
Panini stickers.

There were
Millions
Of
Brazilians.

Brenda
Was a World Cup
Uncomprehender,
Could not understand
Roy’s four-week long
Bender.

Brenda
Had no interest
In Walter Zenga
Or the thigh strain
Of a Ghanaian
Defender.

Brenda
Was tired of the way
She’d pretend her
Marriage wasn’t mashed
Like a frog in a
Blender.

Brenda
Would listen to
Love Me Tender
And hoped Roy might be
Returned to
Sender.

an avalanche
from above

a laburnum
of love

a cascade
of curls

a waterfall
of whirls

a drizzle
of drama

The collie wobbles
And waggles,
His fur catches
And snaggles,
Sees something hidden
In the prickles.
Jules Rimet Trophy!
Clever Pickles!

The phlegm flew
Like a bullet,
And settled on
Völler’s mullet,
A glistening globule
Of Rijkaard’s flobule. 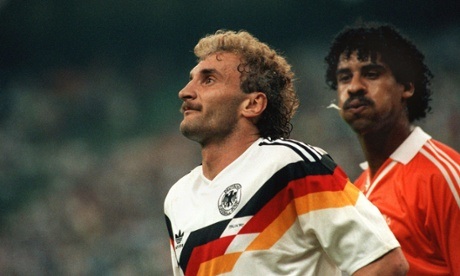 Every quadrennial
Bob bought a sticker album
In the hope of
Finding himself
Within its pages
And fulfilling an ambition
He’d held for ages
Of playing in the World Cup
Final stages.

Even upon reaching
The age of ninety-three
He would still
Get agitated
For this was a dream
Never abrogated
Despite the fact
He’d had both legs
Amputated.

Bob was something of an optimist.